Well this blog will need to be re-titled to INTOUCH DISTRICT 2!

Here are the unofficial results for District 2 for those who love to see the numbers.

I am greatly thankful for your support.

This morning I am ready to have a bit of a lie down and a doze then off for a long hike to enjoy the natural beauty of this sunny day.

The race for Mayor was handily won by Peter Muttart.

Hi Everyone. Today I am sharing the news that my sleeves are rolled up and I am ready to represent you for another term as your councillor on Kings County Council.

I still hold a strong commitment to ensuring that the residents of the county get the excellent representation they deserve and I am looking forward with great anticipation to what the change from a Warden to Mayor can provide. I think this is a very positive change and I want to be part of the mandate given to the first ever Mayor of our County.

I believe the leadership of a Mayor elected by the people will create a truly new type of county council where the Mayor can challenge us all to work super hard to "do good by" everyone regardless of where in the nine new districts we live.

I have just published my election website. I am asking you to put your trust in me for another 4-years.

Please take a look and ask any questions you might have. It would be greatly appreciated if you would consider how you might help in the weeks ahead as the campaign rolls out.

A boundary review has resulted in a new district for the 2016-2020 term of council The "New District 2" encompasses most of the communities I represented in the "Old District 3".

I am sad to say good-bye to Halls Harbour.

And, glad to say hello to a few new communities.

The area of North Kentville on the east side of Highway 341 is now part of the New District Two. That new area's border is Tiny Parrish Road, Church and Belcher. Also included is Foxhill Subdivision.

I am looking forward to meeting many more residents of the new area in the weeks immediately ahead.

Posted by paulineraven at 10:09 No comments:

I voted against lowering energy efficiency targets. Here's why.

I believe it was fundamentally the wrong direction for municipal leaders to head towards not only because we were provided with so little information to base the decision on, but also because we were presented with only one option for reducing the already climbing cost to build a new municipal complex.

And no, the design below isn't what Kings County is being presented with... It's the Mosiac Centre, an energy efficient building completed to the "net zero" standard in Alberta last year. It presents an interesting contrast to what's going on in our neighbourhood.

This beautiful 30,000 square foot building was completed for the all inclusive original budget $10.5 million dollars. We are currently at $8 million for a 24,000 square foot building and an unambitious energy efficient target of 10-15% below 2011 National Building Code standard. We'd started at 40% under the Model National Energy Building Code. We haven't even seen a building design yet, but are being told it will take another $2 million to reach an energy efficient target of 25%.

You can read more about the Mosaic building in the Huffington Post.

It is my opinion that ALL municipal councils across Canada need to do their bit to address climate change. Raising not lowering energy efficiency targets is what 2016 decisions call for.

Canada's current goal of limiting increasing temperatures to a 1.5 C rise is ambitious given the lack of action over prior years by our nation.

Without immediate and ongoing action from ALL Canadian leaders at ALL governement levels success is not possible. We will also need personal buy-in from citizens to make the big changes needed. Sadly, at this same council meeting, a motion to establish a Property Accessed Clean Energy program for the county's ratepayers was defeated in a 7 to 4 vote.

Kings County simply does not have sufficient council members that take climate change seriously. I hope that will be changed after the October 15 election. In addition to the need to address climate change there is great opportunity in developing a green energy economy right here in Kings County.

In the case of needing a new complex we do have options. The rush to build a new complex on expensive land in Coldbrook Village Park is inexplicable and has caused the majority of council to lose sight of all other options. Here are some of the things we didn't get to discuss:
Come out on the night of August 10 and have your say. Maybe its not too late for the public to challenge these dastardly decisions! Stantec will be presenting its new energy reduced plans at 7PM at the current Municipal Complex, 87 Cornwallis Street, Kentville. You can learn more about council's work to date by clicking here.
Posted by paulineraven at 07:53 2 comments: 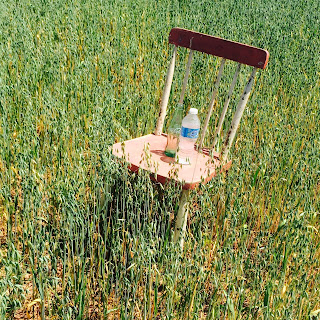 For example, in recent years sloping land, once seen as less valuable and challenging to farm, have been repurposed, becoming the vital component of a robust wine industry, particularly here in Kings County.

Especially on days when the centre is open and is hosting an event, it is well worth the drive and the visit. Everything at the centre happens thanks to a keen group of volunteers determined to ensure that past and present agricultural practices are a valued part of our understanding of rural life. 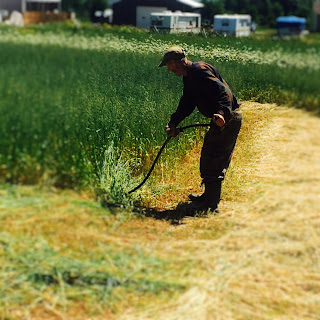 Yesterday, I dropped in to witness the annual hand mowing competition where about 50 spectators and competitors gathered.

Each entrant is judged on style, speed, width cut and the height of the stubble left of a 25 foot path of grain.

Following cutting this wide swatch each had to clear a path around a chair without disturbing the bottles on that chair. A task of percision!

I was moved to see 96-year old Arthur Wheaton ably compete. And, for me, Helene Redden was hands down the mower with the best style. 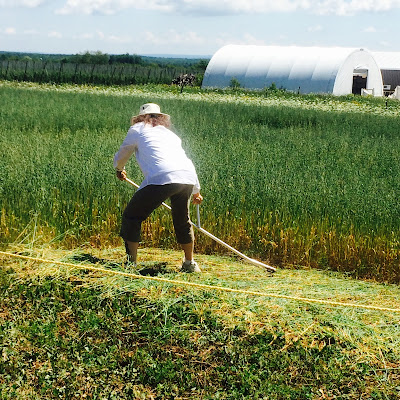 Posted by paulineraven at 07:17 No comments:

Council is saying there will not be an appeal of the nine district decision of the Nova Scotia Utility and Review Board. But they will meet with representatives of the seven villages of Kings County prior to a final decision on August 2.

Yesterday at Committee of the Whole the UARB ruling was accepted despite the Warden media comments that lead to the headline: "Council mulling over an appeal".

After much posturing about the need to wait to discuss the decision behind closed doors at noon with legal counsel (Kevin Latimer) it was decided to move ahead with a debate. The intent at that point was that the lawyer would attend and answer councillors' questions in open chambers. Meanwhile Chief Administrative Officer Tom MacEwan had communicated with Mr. Latimer by email to relate council's decision to discuss the issue openly.

Subsequently, Mr. Latimer sent an email declining the opportunity to provide his opinions in open chambers. The end result was a 10 to 1 vote to recommend acceptance of the UARB decision, with Councillor Atwater providing the dissenting vote.

It was, in my opinion, unnecessarily complicated to get to this point. The recommendation to accept the UARB decision to have nine districts in the upcoming election goes to the regular council meeting scheduled for 6PM on August 2, for final debate and voting.

It is notable that later in the day the CAO and the Warden got messages from the Chair of the Greenwood Village Commission requesting a meeting with council regarding the UARB decision prior to the final vote on August 2.

The villages had not indicated to council as a whole, any particular interest in the UARB decision prior to yesterday's debate and recommendation.
Posted by paulineraven at 07:21 No comments:

The Honourable Scott Brison, President of the Treasury Board and Member of Parliament for Kings – Hants, was in Halls Harbour this morning to make a very welcome funding announcement. 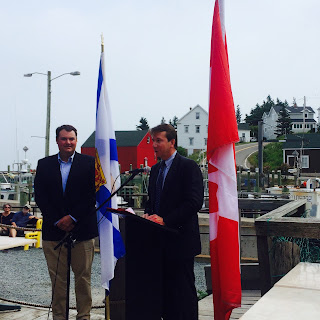 The Harbour's share of the approximately $47 million in harbour improvement projects will pay for replacement of a wharf on the western side of the harbour that docks several boats. The wharf leads from the sluice gate to the board walk. Funding will also be used for a necessary retaining wall between the wharf and the highway.
The province will also be contributing and the work will be tendered soon. Construction is planned to begin in October 2016 with completion by early summer 2017. Minister Brison noted that the commercial fishery at Hall’s Harbour lands over $1.9 million annually and is home to 12 vessels. Applications for funding is managed by a harbour authority, ably chaired by Charles Skerry. And who is it that said: "behind every great man is an equally great woman?" In Charles' case that woman is Sylvia Skerry. We are very fortunate in Kings-Hants to have a hard-working M-P and the hard-working volunteers of the Halls Harbour Authority. It's an enthusiastic combination of talent.
Hats off to everyone... And safe fishing to the many crews who brave the highest tides in the world to ensure our fishery remains the great economic engine it is for valley communities.
Posted by paulineraven at 10:32 No comments:

Halls Harbour photos --- come get a few more of your own

Other than Peggy's Cove are photos of any other place in Nova Scotia used as frequently for cover shots? 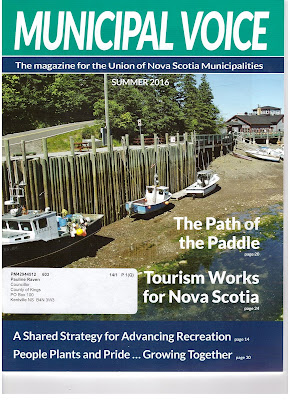 Whether it's showing the low or the high tide photos of Halls Harbour grace Nova Scotia's tourist guides and publications of all other sorts.

The part of the wharf shown here is to be rebuilt with construction starting at the end of this year's tourist season.

Volunteers are also completing work to ensure that a small, non-commercial wharf on the approach to the harbour will soon be ready for increased by the community and its many visitors.

A big thanks is due to those across the county who tirelessly work to ensure our county's amenities are the best they can be! Do you know that the general maintenance in Halls Harbour, from flower boxes to the placement and emptying of garbage cans, is done by volunteers? You all know who you are but I bet visitors from other parts of Canada and the world would never guess that fact.

Without you, and people just like you in many other communities, there would be no grant applications, no "free to the community" labour and skills, and a lot less reason to get out and about in Kings County!


Posted by paulineraven at 11:37 No comments: 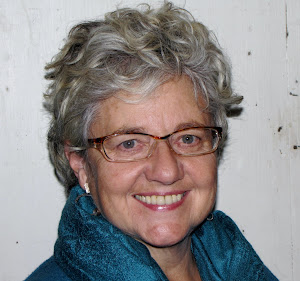